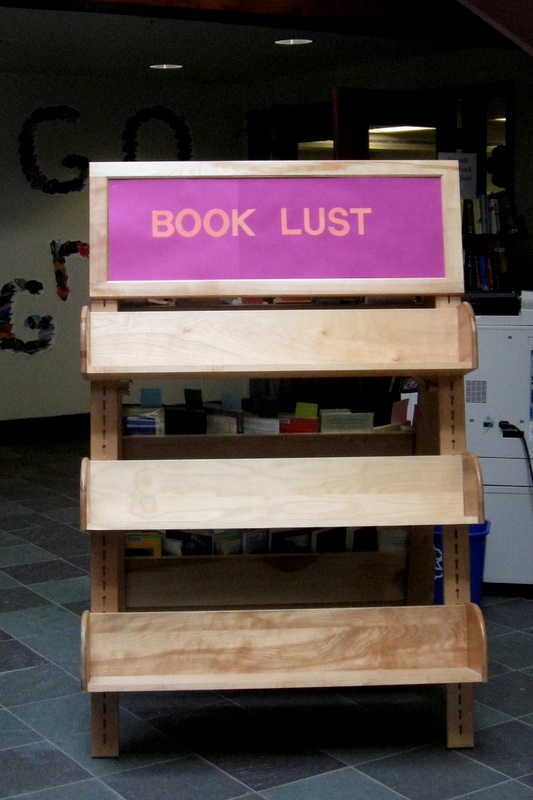 This at the Georgetown (MA) Peabody Library.

Leo and I went in to Boston today to meet one of our favorite illustrators, Joëlle Jolivet.  She is on a book tour promoting her latest book, “Oops“, starring the family that appeared in “365 Penguins“.

The illustrator drawing a knight in Leo’s copy of “Almost Everything“.  He thought it was pretty cool! 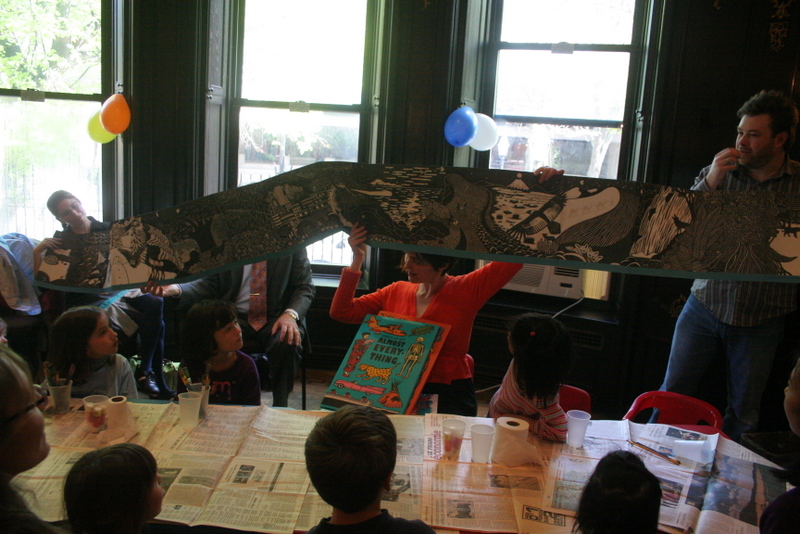 Showing off the “night” side of “Panorama“.  We brought along four of her books and she had Leo get the bag of them and showed them to all the kids.

Showing a page from “Zoo-ology”

Reading from “Oops” — the kids kept creeping closer and closer.

…but you can’t take a girl away from her horse books!  All from our favorite bookstore in Vermont, Bear Pond Books in Montpelier.

from Michael Morpurgo in the Guardian:

Of course we must and should study literature in our schools, but first we have to imbue our children with a love of stories.

And to do that, parents and teachers have to have a passion for stories themselves: they have to pass it on. The children have to know that you mean it, you feel it, you love it…

In Finland they do things differently. Finnish children stay at home much longer. They play and tell stories years after ours are sitting down in school to a target-driven curriculum. Maybe that’s partly why Finnish children are happier, and maybe that’s why they rate higher in the literacy stakes. Maybe they haven’t put the cart before the horse as we do. They give their children the time and space to grow up with stories, to enjoy them, so that the association develops slowly, organically, is not imposed. read more here

(from SFGate.com I’m a few months into reading graphic novels and I haven’t read any of these yet, but I’ll try. Actually, looking at the covers, I’m not so sure! This seems the realm of boys and men)

Comic book geeks aren’t a proselytizing lot. I spent most of my comic-reading years trying to hide the fact that I’d rather spend my time reading The Fantastic Four and Batman than books without pictures in them. When you’re getting stuffed in a locker, there just isn’t much opportunity to discuss the finer points of Chris Claremont and Frank Miller’s writing.But with Brian K. Vaughan’s Y: The Last Man publishing its 60th and final issue in January, the perfect introduction to the joy of reading comics is finally complete. Not only is Vaughan one of the best young comic book writers around, his story of an escape artist and a monkey trying to survive after a virus wipes out every other male primate on the planet is extremely accessible to the comic-averse masses. (It’s no mistake that J.J. Abrams recruited him to write for “Lost.”)So more than 20 years after picking up our first X-Men comic, we’re ready to craft the comic book equivalent of a mix tape.Like jazz, wine enthusiasm and “The Wire,” the hardest part about reading and enjoying comic books is knowing where to begin. The WonderCon comic book convention, beginning today and lasting through the weekend in San Francisco, is a pretty good place to start browsing.Here’s our ultimate comic book mix tape – title it Eight Comic Books You Need to Read Before You Die, or the only slightly less cumbersome Comics for People Who Think They Hate Comics. I would suggest reading them in the order listed below. All of these are available as trade paperbacks, which compile several comics into one book. In the case of Y: The Last Man, Bone and Sandman, which have multiple editions, we’ve chosen the first volume – read the rest of the saga only if you get hooked.Comic fans: Please make your own suggestions in the comments section of the online version of this story at www.sfgate.com:

Y: The Last Man: Unmanned (Brian K. Vaughan and Pia Guerra): I’m an even bigger fan of Vaughan’s “Ex Machina,” which weaves an intriguing alternate reality around the Sept. 11 attacks. But the recently finished Y: The Last Man is his masterpiece, taking a B-movie premise – what if every man on the planet suddenly died – and turning it into an intriguing, realistic, funny and ultimately touching epic.

Daredevil: Born Again (Frank Miller and David Mazzucchelli): Forget that bad Ben Affleck movie. This mid-1980s work from Sin City and 300 writer Frank Miller is a powerful and wrenching tale, throwing the attorney-by-day-crime fighter-by-night down a staircase of addiction and betrayal. It looks a lot like the old X-Men and Avengers comics that you used to enjoy but shows a maturity that will mark much of Miller’s later work.

Swamp Thing (Alan Moore): Another early work by a comic book legend, Alan Moore took over this DC Comics franchise in 1984 when it was all but dead. He completely re-wrote the character’s history, but what could have been a “Highlander 2: The Quickening”-style disaster works in all the right ways, with narrative depth and a love story that resonates.

Marvels (Kurt Busiek and Alex Ross): Told from the point of view of a photojournalist, Marvels gives a street-level view of the greatest moments in superhero history – covering half of the 20th century. Busiek’s story is interesting, but the selling point here is the hyper-realistic art from Alex Ross, who later drew the equally incredible-looking Kingdom Come.

Bone Volume 1: Out From Boneville (Jeff Smith): Imagine if someone took a handful of Looney Tunes characters and tossed them into a Ronnie James Dio song. This cartoonish independent comic, which ran for more than a decade in the 1990s and early 2000s, can be very funny but also has a “Lord of the Rings” vibe. And not just the happy parts in Hobbitland.

Watchmen (Alan Moore and Dave Gibbons): We’ll have to see if the version from “300″ director Zack Snyder, co-written by Lowell High graduate Alex Tse, can make what appears to be an impossible transition to the big screen. (”Watchmen” is coming in 2009.) The 1986-87 publication tells the gripping and incredibly dense story of costumed adventurers wrestling with their past and future during the Cold War. Arguably the greatest comic book in history.

The Sandman: Preludes and Nocturnes (Neil Gaiman): Gaiman is known as a strong storyteller, but his biggest gift is with language. This introduction to his most famous character – Morpheus, the Lord of Dreams – passes through a reality and fantasy world, painting an often pessimistic portrait of mankind. Later volumes are better, but this is a necessary introduction to the series.

The Dark Knight Returns (Frank Miller): The tale of Batman’s rebirth as an aged crime fighter is packed with action, with a storyline that includes the Joker, Two-Face, a one-armed Green Arrow and an epic showdown between Batman and Superman. This 1986 series is Miller’s best work, filled with darkness and despair but also an underlying hope.

Martha was so discouraged. Her garden was an ugly mess of weeds. “I just don’t seem to have a green thumb,” she sobbed. 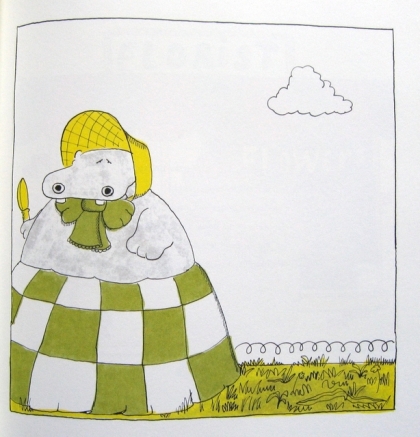 Maurice Sendak on James Marshall and this story:

As I write this on a lovely spring afternoon and glimpse out the window the miracle of my old weeping cherry tree cascading pink blossoms, after having spent many happy hours studying and recollecting and missing James, I am reminded of a line, now full of new meaning, from ”The Last Story” in ”George and Martha Encore.” Out of love for Martha, and to ease her misery over her messy garden, George stuffs store-bought tulips into the ground. Martha catches him, and George is embarrassed. But Martha is moved. ‘‘Dear George,” she says. ”I would much rather have a friend like you than all the gardens in the world.”

Leo sent a card this year with a George and Martha story. If you don’t know them, they were created by James Marshall and are the perfect thing for four-year-olds. Leo already has another story picked out for a Halloween card (I didn’t know we had to do a Halloween card, but apparently, we do).

Here is more from Maurice Sendak on the brilliance of James Marshall:

The George and Martha books teach us nothing and everything. That is Marshall’s way. Just when you are lulled by the ease of it all, he pokes you sharply. My favorite poke comes at the end of ”The Surprise” in ”George and Martha Round and Round.” When George has ”a wicked idea” and hoses Martha down ”one late summer morning,” Martha screams ”Egads!” and declares war on George. Nothing he can say will soothe her wrath, but Martha suffers the consequences of her inability to forgive. She can’t tell George a funny story she’s heard because ”she and George were no longer on speaking terms.” But a falling autumn leaf does the trick. It’s George’s favorite season, so Martha goes straight to her old friend’s house and they make up and watch the autumntime together. ”Good friends just can’t stay cross for long,” George comments. ”You can say that again,” says Martha. A neat, sweet ending? Not a chance. Turn the page and there is a demented-looking Martha (how did Marshall convey dementia, malice and get-evenness with two mere flicks of his pen for eyes?), spritzing hose in hand, lying in wait for dapper George with fedora and cane to cross her path. Marshall’s last line: ”But when summer rolled around again, Martha was ready and waiting.”

Leo felt like he got to meet Martha & George tonight at the Brookline Booksmith — he spied these large & dusty stuffed versions up high on a shelf.

Above: Martha whispering in George’s ear

Below: Leo giving George a hug